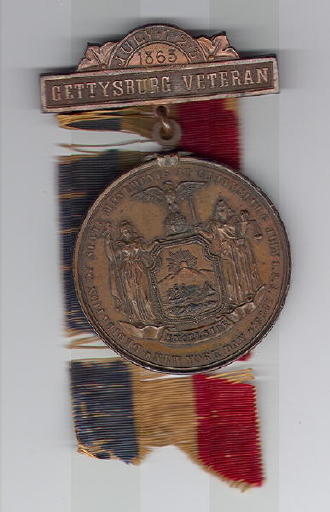 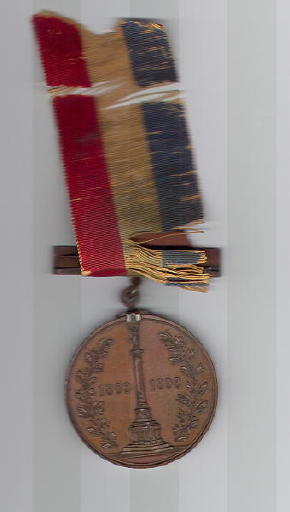 My greart-great grandfather, Leander Bartlett, enlisted in the 93rd New York Infantry in 1861 and was assigned to Company H. He served until June 1863 when he was discharged at Brandy Station, VA days before the famous cavalry battle. He reenlisted in the 93rd N.Y. as a veteran and fought at Gettysburg and continued to serve until he was wounded on August 14, 1864 at Deep Bottom, VA during the siege of Petersburg, VA. As a result of his wounds, his right arm was amputated just above the elbow.

In 1893, on the 30th anniversary of the Battle of Gettysburg, the State of New York decided to support the return of those living veterans of that battle to Gettysburg for the dedication of the New York Monument. Special trains were arranged to take the soldiers from various parts of New York to Gettysburg, and the old soldiers camped on the old battlefield for the 3 days of commemeration, July 1-3, 1893.

New York also had Gettysburg Veterans' medals struck, somewhere around 11,000 of them.

The medal is a circular medal 44mm in diameter, suspended from a bronze bar which reads: "July 1-2-3 1863 Gettysburg Veteran" and backed by a red, white and blue ribbon.

The obverse contains the Great Seal of the State of New York surrounded by the words "Dedication of State Monuments at Gettysburg July 1, 2, 3 1893 - New York Day".

The reverse contains a bas relief of the New York Monument with the dates 1863-1893. An open laurel surrounds the monument.

As a special incentive, New York State inscribed, in impressed letters around the edge of the medal, the name and unit of the veteran who attended the dedication. The one pictured here is inscribed "L. Bartlett 93rd New York Infantry". Leander died in 1896 and his son William received his father's medal. He passed it on to his own son, Leander Bartlett, my maternal grandfather, who then passed it on to me. 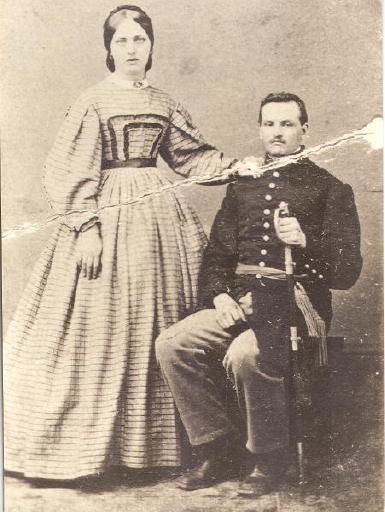 Photo of Leander Bartlett, taken in Albany in 1861,
with his wife Susan, a cousin of President Chester A. Arthur.


Lieutenant Colonel Kevin M. Lynch as been in the New York Guard
for the past 20 years. During the late 1990's he served as the Director
of Military History for the New York State Division of Military and Naval Affairs,
and was Chairman of the N.Y. State Civil War Battleflag Commission.

Colonel Lynch may be contacted at KLynch1029@aol.com